How to Install FreeBSD on a Raspberry Pi 3b+ 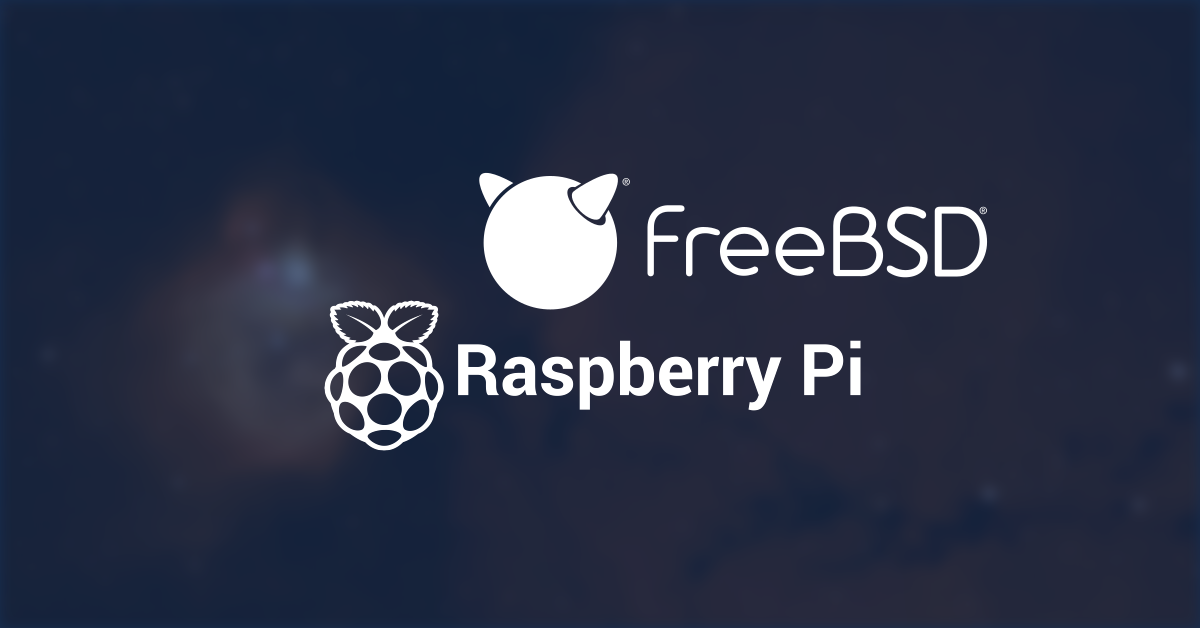 FreeBSD is a free open-source unix-like operating system for various platforms. It focuses on features, speed and stability. It is derived from BSD, the version of UNIX developed at the University of California, Berkeley. It is a mature, clean, and minimalist operating system. It is considered to be one of the most stable and reliable operating systems out there for use with embedded devices, single board computers and servers. Here is a fun fact, the legendary PlayStation 4's operating system Orbis OS is a fork of FreeBSD (release 9).
In this guide we will go through the necessary steps to get up and running FreeBSD on your Raspberry Pi device.

In this step, we will download the latest available FreeBSD image to a temp folder called 'tmp', and use a tool called 'dd' to write this image to our Micro-SD card. Assuming your Micro-SD device is at /dev/sdb

The image is stored on the FreeBSD servers in a compressed form xz, will need to un-compress the image using a tool called xz and redirect the output of the xz tool via grep to the input of dd to write the image directly to our Micro-SD card in a single step.

After we have prepared our image, it is time to insert it to your Raspberry Pi and boot your device. SSH service is configured to start by default, but FreeBSD does not permit root login over SSH by default, so we will login using the regular user freebsd and its password freebsd. When you will need root permissions, you can elevate to root by typing su - in the shell, the default root password is root.

If you prefer, you can create your own user, and remove the default one. Type adduser into the shell and follow the on-screen steps.

To remove the default user, we will type rmuser in our shell, followed by the user name we would like to remove.

Vanilla FreeBSD image shipped with networking connection configured as DHCP by default, lets change that to static IP. The networking configuration file is located at /etc/rc.conf, we will edit this file with vi and add the following:

Also, while at it, lets set a hostname for our Raspberry Pi, add the following line to the /etc/rc.conf file.

After tweaking /etc/rc.conf it is time to reload the network & routing services

To install packages, and fetch repository for ports, we will need to make sure that our system's time is properly set. Mismatched system time can cause unexpected issues and cause troubles to communicated and establish a secure handshake with our repository servers. To avoid that, we will configure our system to run ntpd service which will make sure our system is getting the right time and also, we will use a command line tool called tzsetup which will assist us to select a specific zone for our system.

Finally, edit /etc/ntp.conf and add ntp servers from your region pool. My location is at Asia, so in my case, I have added asian servers 0-4.

If you are not sure what is the right server for your timezone, you can find your pool here

Reboot the system, and check that your system's clock is now synchronized with ntp. To do that, run the date command in the terminal.

The preferred way to install a package in FreeBSD is to use the binary package management system pkg. Installing an application from pkg will ensure fast and easy way to setup the software you need and in most cases it would be enough.

FreeBSD has multiple ways to install packages to the system. The question is, would you prefer installing an application from source? Or would you like to skip app optimization and rather install a pre-compiled one? Installing a package using pkg would be a quicker way, although not the optimized one.

In some cases you might need to have a specific option turned on which wasn't offered in the pre-built binary, but for most cases, the default options that are shipped with a pre-compiled binary will suite most users.

Make sure you only work with one mechanism or the other, DO NOT combine both on your system as it would cause messy packaging system with messy dependencies, make your system unstable and probably unusable.

Assuming we have an internet connection, lets install few packages to get things rolling. On the first time we plan to use the pkg package management system, we will have to bootstrap our system to use pkg:

Having a functional system allows us to focus on other services we would like to setup. At this point, we have a working FreeBSD operating system on our Raspberry Pi, from here, we can add additional packages such as installing the X system, which will provide you a graphical environment, or setup a FAMP stack and start hosting a webserver on this system.

After reading this guide you will understand how to prepared your Micro-SD card with FreeBSD image for your Raspberry Pi, configure user accounts, networking, Timezone and also how to install some daily used packages using FreeBSD's binary package manager.

Hi,
just got a brandnew raspberry 4 with 8GB RAM, and this board is not compatible with the current FreeBSD images. It boots as described here ( so your description is very good and correct), but loading the start.elf fails.
Last messages before the boot stops are:
– start.elf: is not compatible
– This board requires newer software
– Error: 00000044

Hey Bernhard Ernst,
I’ve installed FreeBSD 12.1 on a Raspberry Pi 3b+ in this guide. Although it seems that it also should work on Raspberry Pi 4.
At the bottom of this link you will find relevant information for RPi4: https://wiki.freebsd.org/arm/Raspberry%20Pi#Raspberry_Pi_3_or_Pi_4

Thx for the link. I read the document several times, but I feel that the described procedure is a bit to heavy for me. I have to learn more about the Pi’s features.

Introduction OpenMediaVault is a network attached storage (NAS) solution based on Debian Linux. It contains services like SSH, (S)FTP, SMB/CIFS, DAAP media server, RSync, BitTorrent client and many more. Thanks to the modular design of Read more…

How to install OpenBSD on a Raspberry Pi 4

How to install Arch Linux ARM on Raspberry Pi 3b+